News
In the News

CITIC Metal to acquire a 19.9% stake in Ivanhoe Mines

Under terms of the agreement signed in Beijing today, Ivanhoe Mines will issue 196,602,037 common shares to CITIC Metal (or its designated affiliate) through a private placement at a price of C$3.68 per share, yielding gross proceeds to Ivanhoe of approximately C$723 million (US$560 million).

CITIC Metal will come to own 19.9% of Ivanhoe Mines’ issued and outstanding common shares when the placement is completed, establishing CITIC Metal as Ivanhoe’s largest single shareholder. Mr. Friedland will be Ivanhoe’s second-largest shareholder, with over 17% shareholding.

Ivanhoe Mines intends to use the proceeds for the advancement of the company’s world-scale mine development projects in Southern Africa ─ Kamoa-Kakula, Platreef and Kipushi ─ and also for working capital and general corporate purposes.

China’s Zijin Mining Group, which acquired a 9.9% stake in Ivanhoe Mines in 2015 through a wholly-owned subsidiary, will be entitled to exercise its existing anti-dilution rights through a concurrent private placement, which could result in additional proceeds of C$78 million (US$60 million) if exercised in full. (In addition, Zijin and Ivanhoe each are equal 39.6% joint-venture partners in the ongoing development of Ivanhoe’s flagship Kamoa-Kakula copper project.)

Mr. Friedland said the agreement with CITIC Metal is the culmination of a 15-year relationship between the leaderships of Ivanhoe Mines and CITIC. “In 2003, the original Ivanhoe Mines was grappling with the challenge of developing its vast copper-gold discoveries at the Oyu Tolgoi Project in southern Mongolia. Following extensive discussions, Ivanhoe and CITIC established a strategic alliance to cooperatively pursue a number of selected common interests in metals production and related technologies.

“For some time now, the board of directors and senior management of today’s Ivanhoe Mines have been evaluating potential transactions that would combine the critical elements needed for Ivanhoe to advance the development of our exceptional assets that have been established in Southern Africa in recent years,” Mr. Friedland added.

“A fundamental, qualifying condition has been that any new partner must be complementary to our established partners, Zijin and the Japanese consortium led by ITOCHU Corporation. We are confident that CITIC Metal shares our vision and has the experience and financial resources to help us advance our three projects to production, creating value for Ivanhoe’s stakeholders in the Democratic Republic of Congo and South Africa, and our international shareholders.” 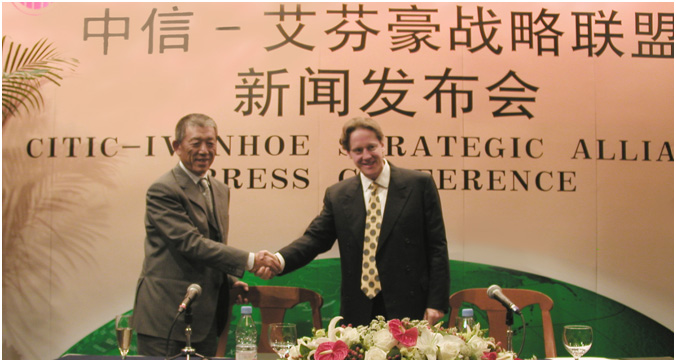 Mr. Friedland said that the strategic investment arranged by CITIC Metal – a respected state-owned enterprise in China, which now is the world’s largest consumer of base metals – is a critical validation of the quality of Ivanhoe’s assets.

“CITIC Metal will be playing a significant role in Ivanhoe’s emergence as one of the world's leading producers of copper, zinc and platinum-group metals. Today, with CITIC Metal’s commitment to this investment, Ivanhoe is one step closer to becoming Canada’s next important, diversified mining company.”

Sun Yufeng, President of CITIC Metal Group Limited, said that CITIC and Ivanhoe have shared a long-standing relationship dating back more than 15 years. “Mr. Friedland is a respected friend of CITIC and through this strategic investment we are delighted to become a partner in Ivanhoe’s projects with Mr. Friedland and his accomplished team of mine finders and developers.

“CITIC Metal and Ivanhoe are truly complementary to one another. This cooperation will result in a win-win scenario. Together with existing shareholders and stakeholders, and by employing best international practice, we will achieve the gold standard for Sino-Canadian companies, resulting in a partnership that will benefit the people in the Democratic Republic of Congo, South Africa, China and Canada,” Mr. Sun added.

“Ivanhoe’s three projects are some of the world’s best undeveloped mining assets. We are looking forward to working closely with the Ivanhoe team to build innovative, environmentally- and socially-responsible mines that can contribute to the advancement of economic transformations in Africa and China.”

The Ivanhoe-CITIC Metal transaction is conditional upon completion of confirmatory due diligence and CITIC internal approval, which is expected in approximately 30 days. It also is subject to approval by the Toronto Stock Exchange, other customary closing conditions, and recordals and registration with certain Chinese regulatory agencies. Receipt of all necessary approvals and completion of the transaction is expected to take up to four months.

While the required approvals are being obtained for the transaction, CITIC Metal has agreed to provide Ivanhoe with a nine-month, interim loan ofUS$100 million in accordance with an agreed term-loan-facility agreement. The loan, which is expected to be available in approximately 35 days, will have an interest rate of 6%. It will be pre-payable, or will be repaid with part of the 19.9% private placement proceeds – or no later than nine months following draw-down. Mr. Friedland will provide a secured, limited-recourse guarantee and securities pledge securing of Ivanhoe Mines’ obligation in support of the interim loan facility.

Upon closing of the private placement, CITIC Metal and Ivanhoe Mines will enter into an investor rights agreement. Among key provisions:

As part of the private-placement agreement, CITIC Metal and Mr. Friedland have signed reciprocal standstill agreements that prevent either of them from increasing their ownership stake in Ivanhoe Mines to more than 19.9% until after closing and thereafter until January 8, 2022. In addition, upon closing CITIC Metal and Mr. Friedland will enter into a reciprocal disposition and tag-along agreement.

About CITIC Metal and CITIC Limited

CITIC Metal Co., Ltd. is a wholly-owned subsidiary of CITIC Limited. As CITIC Limited’s arm in the business of resources and energy, CITIC Metal specializes in the import and distribution of copper, zinc, platinum-group metals, niobium products, iron ore, coal, and non-ferrous metals, export of silver, trading of steel products, and investments in metals and mining projects. CITIC Metal’s major mining investments include a 15% ownership in the Las Bambas copper project in Peru and leading a Chinese consortium in acquiring a 15% ownership in the Brazil-based niobium producer CBMM.

CITIC Limited is listed on the Stock Exchange of Hong Kong, where it is a constituent of the Hang Seng Index. CITIC Group Corporation, a Chinese state-owned enterprise, owns 58% of CITIC Limited.