KOLWEZI, DEMOCRATIC REPUBLIC OF CONGO – Ivanhoe Mines (TSX: IVN; OTCQX:IVPAF) Co-Chairs Robert Friedland and Yufeng "Miles" Sun announced today that underground development at the Kakula Copper Mine continues to advance ahead of schedule with more than 15.4 kilometres now complete, which is 4.7 kilometres ahead of plan. In May, the mining team set its fifth consecutive monthly development record of 1,868 metres of underground advancement – 535 metres ahead of plan for the month.

Mr. Friedland and Mr. Sun also noted that the fabrication of structural steel and key equipment for Kakula's initial 3.8-million-tonne-per-annum processing plant is progressing rapidly at manufacturing facilities in China, South Africa and Europe. Fabrication of the plant's largest components – the ball mills – is nearing completion at CITIC Heavy Industries' factory in Luoyang, China, and shipping of major components is underway.

Approximately 100 truck loads of equipment for the processing plant are en route to the Kakula Mine from the port of Durban, South Africa. The two ball mills – a primary and secondary mill each measuring 9.75 metres (32 feet) long and 6.1 metres (20 feet) in diameter that will be installed in series to achieve a grind of 80% passing 53 micrometres – are being transported to Kamoa-Kakula in three separate shipments. One shipment is on the road between Durban and Kamoa-Kakula; one shipment is on a cargo ship and expected to arrive at Durban on June 18th; and the third shipment is scheduled to depart Shanghai, China on June 18th.

Aerial view of the Kakula Mine showing the tonnes and grade of the pre-production stockpiles. The main declines are in the center of the picture and the processing plant in the upper right corner. 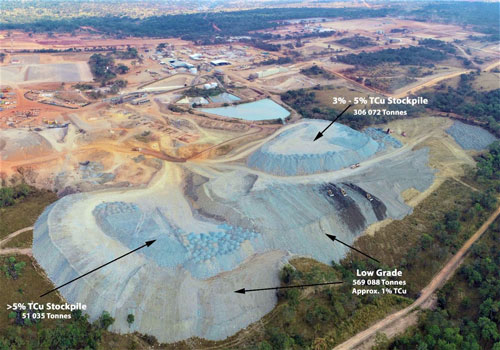 Underground development at the Kakula Mine proceeding extremely well

Development of the Kakula Mine, the first deposit to be placed into production on the 400-square-kilometre Kamoa-Kakula mining licence, is well ahead of schedule. Mine access drives 1 and 2 (interconnected, parallel tunnels that will provide access to ore zones) continue to progress well towards the southern portion of the orebody.

Development also is well advanced on the eastern perimeter drives and the room-and-pillar mining area. Development from the southern portal has reached south access drives 1 and 2, with mining crews working to establish the connection of these drives with mine access drives 1 and 2 from the north side of the orebody. Approximately 1,000 metres of development is required before the northern and southern access drives are joined, which is scheduled to occur in September 2020.

A second crew comprised of young Congolese miners was added to the Kakula mining team in March bringing the total number of underground mining crews to nine. The mine will continue to add additional crews over the next year to further accelerate development.

Underground mining also is occurring at the Kansoko Mine, located at the Kamoa deposit approximately 10 kilometres north of the Kakula Mine. Kansoko is development ready and currently is being used to train new crews of young Congolese miners.

Kakula's main belt and sacrificial belts have been installed for the conveyor system that will transport ore from underground to surface. Initial commissioning for the conveyor system is scheduled to occur in the next two weeks, with final commissioning for the full system (including the fire suppression system and all safety components) scheduled for mid-July.

Team members from DRC-based Kamoa Kakula Construction Company (KKCC), at the head end of the high-capacity decline conveyor system that will transport copper ore from the Kakula Mine's underground workings to the surface processing plant. In parallel with the construction of Kamoa-Kakula's phase 1 Kakula Mine, work is progressing on the independent Kakula definitive feasibility study (DFS) and an updated Integrated Development Plan for the entire Kamoa-Kakula mining complex, which is expected to be issued in mid-2020. The Kakula DFS will provide an increased level of accuracy for the project economics for the initial phase of mine development at Kakula. The Integrated Development Plan will include details on the planned expansion phases for the greater Kamoa-Kakula mining complex, incorporating updates for mineral resources, production rates and economic analysis. A 63-tonne Sandvik truck delivers another load of high-grade chalcocite ore to the surface stockpiles. The high-grade stockpile is projected to significantly expand in the coming months as the majority of Kakula's underground development will be in mining zones grading +5% copper. 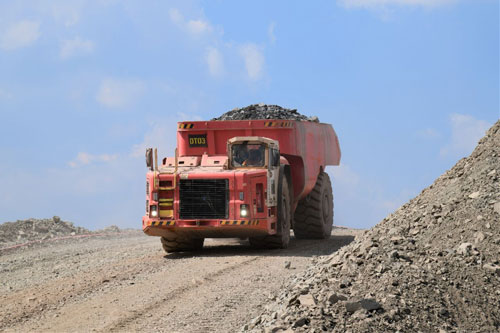 Manufacturing and delivery to site of all long lead items for Kakula's 3.8 million-tonne-per-annum (Mtpa) concentrator plant facility is well advanced with some items already having been delivered. Plant earthworks is complete, and plant civil works are advancing rapidly. SMPP (structural, mechanical, piping and platework) fabrication is progressing well with some steel already on route to site, and mobilization of the erection crews have started. The contract for the EC&I (Electrical, Control and Instrumentation) has been awarded.

The capital cost related to the construction of the mining infrastructure (underground and surface), processing plant and surface infrastructure has been estimated to a basic engineering level of accuracy and is being used as the control budget estimate for the project.

The current estimate of the project's initial capital costs is approximately US$1.3 billion as of January 1, 2019, which assumes commissioning of the first processing plant module in Q3 2021.

Pictured below are a ball mill shell and the girth gear for the Kakula processing plant that were recently completed at CITIC Heavy Industries' factory in Luoyang, China. Approximately 100 truck loads of equipment for the processing plant are now en route to the minesite. 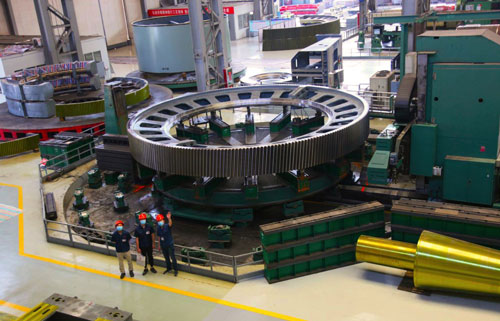 Construction activities at the Mwadingusha hydro-electric power plant, where all six turbines are being replaced, is progressing well, as is the associated 220-kilovolt (Kva) infrastructure to supply the mine with clean hydro-power. The mine is scheduled to be energized with permanent 220kV hydro-generated power by January 2021, well in time for first copper production.

Other critical infrastructure that has recently been completed include: construction of a permanent road between the mine site and the Kolwezi airport; and the construction of the first phase of accommodations for 1,000 employees and contractors.

More than 3,500 employees and contractors are currently working on site, of which approximately 90% are Congolese nationals. To date, there have been no recorded COVID-19 cases in DRC's Lualaba Province where Kamoa-Kakula is located. As a result, on June 1st, Kamoa-Kakula moved from Level 4 to Level 3 of its COVID-19 response plan, allowing the project's Congolese employees to return to commuting from Kolwezi and neighbouring communities.

Kakula's new ICU ward that was constructed to treat potential COVID-19 patients. To date, there have been no cases of COVID-19 at Kamoa-Kakula or in the DRC's Lualaba Province, where Kamoa-Kakula is located. 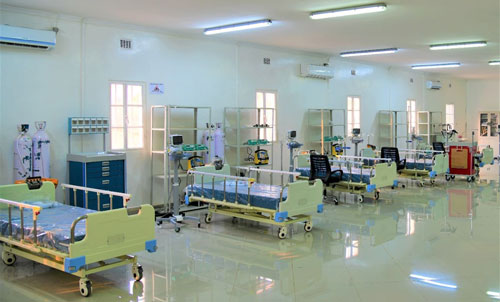 Kamoa-Kakula on track to produce the world's "greenest copper"

Together with its joint-venture partners, Ivanhoe is committed to building modern, safe, mechanized mines that will showcase responsible, "green" mine development.

Kamoa-Kakula is unique as it combines ultra-high copper grades in thick, shallow and relatively flat-lying deposits – allowing for large-scale, highly-productive, mechanized underground mining operations. The ultra-high copper grades and underground mines mean that Kamoa-Kakula will have a small surface footprint and use a fraction of the power, water and consumables – and produce far less tailings – than comparable large, low-grade, open-pit porphyry copper mines currently in operation, or under development, elsewhere in the world.

"We are committed to building the Kamoa-Kakula Project to industry-leading standards in terms of resource efficiency, water and energy usage, and minimizing emissions," said Executive Co-Chairman Robert Friedland. "We are blessed with incredibly high-grade deposits in areas that have an abundance of clean, sustainable hydro power potential ─ providing us with a distinct advantage in our goal to become the world's 'greenest' miner."

Ivanhoe also is committed to powering its mines with clean, sustainable hydro-electricity. Ongoing upgrading work at the Mwadingusha hydro-power plant in the DRC has significantly progressed with major equipment being delivered to site. The progressive re-commissioning of the turbines, fully refurbished and modernized with state-of-the-art control and instrumentation, is underway and is expected to be completed in Q1 2021. The refurbished plant is expected to deliver approximately 72 megawatts (MW) of power to the national power grid.

The work at Mwadingusha is being conducted by engineering firm Stucky, of Lausanne, Switzerland, under the direction of Ivanhoe Mines and Zijin Mining, in conjunction with the DRC's state-owned power company, La Société Nationale d'Electricité (SNEL).

"Clean, renewable hydropower is the best energy solution to support our development priorities as we continue to look for ways to reduce our impact on the environment and produce the copper our world requires," added Mr. Friedland.

Installation of the 120-kilovolt / 11 kilovolt electrical substation at the Kakula Mine. Kakula will be powered by clean, renewable hydroelectricity and will be among the world's lowest greenhouse gas emitters per unit of copper produced. 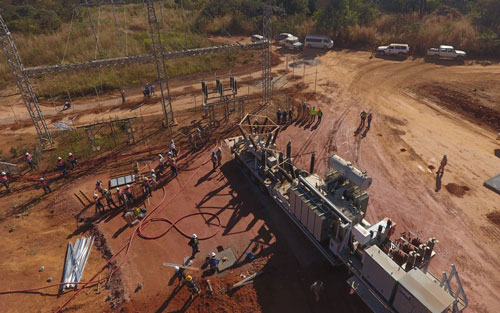 A banana plantation near the Kamoa-Kakula Project, which is owned and operated by a local community women's group. The plantation is one of Kamoa-Kakula's initiatives to enhance food security in nearby communities. 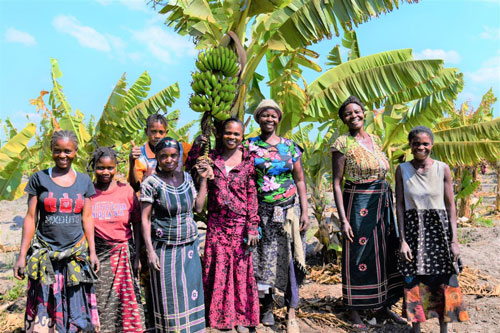 The Original News Link is https://www.ivanhoemines.com/news/2020/kakula-copper-mine-underground-development-now-4.7-kilometres-ahead-of-schedule-more-than-15.4-kilometres-now-complete/