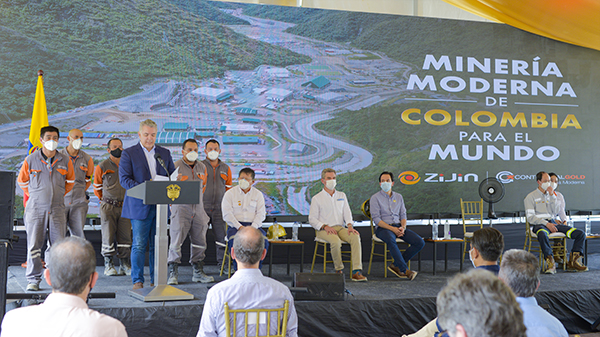 Zijin News, On October 23, the construction of Buriticá Gold Mine in Colombia was completed and the mine has been put into production. It is expected that the production capacity of the gold will reach 9 tonnes after the completion of the technical transformation next year, which will become a new important growth drive for the gold production of Zijin Mining.

Ivan Duque, the President of Colombia witnessed the ceremony in person. Lan Hu, the Chinese Ambassador to Colombia and Chen Jinghe, the Chairman of Zijin Mining (‘the Company’) gave speeches via video and telephone. The Minister of Mine and Energy, Minister of Environment and Sustainable Development of Colombia, Governor of Antioquia Department, Mayor of Buriticá and Shen Shaoyang, Vice President of Zijin Mining attended the ceremony and delivered speeches.

In his speech, President Duque pointed out that the Buriticá Gold Mine is the most important project in the history of Colombian gold mining investment. It is a new attempt to strategical investment of mining industry and the industrial model upgrade. It also contributes to Colombia’s environmental protection and economic development of society. The great value it creates is not only in infrastructure, ecological environment and social resources, but also in giving children in this area the opportunity to receive a better education and allowing local residents to enjoy better medical services. It will help local communities to restart the economy and restore people’s livelihood in the post-epidemic era.

Duque said that this year is the 40th anniversary of the establishment of diplomatic relations between Colombia and China. Colombia has witnessed China’s economic take-off and rapid social development; therefore fully understands the importance of large-scale investment at the national level for economic growth. Now we are witnessing the the Colombian mining industry is opening a new chapter. The commissioning of the Buriticá Gold Mine marks a new journey for Colombia-China investment cooperation.

Chairman Chen Jinghe expressed his sincere gratitude to the President Duque for his attendance, and his respect and sincere greetings to the colleagues and partners who worked on the Buriticá project. He pointed out that Zijin Mining’s investment in Colombia is a strategic decision of the company. While achieving the project's full production capacity as soon as possible, it will also increase the investment in local geological exploration and provide sufficient resource guarantee for new project expansion. It will also seek new development opportunities to promote the economic take-off of Buriticá and the western region of Antioquia!

The Buriticá Gold Mine is a world-class ultra-high-grade large-scale gold mine with a total construction investment of US$610 million. It has 353 tonnes of gold resources and an average grade of 9.3 g/t. At present, the project has directly created more than 2,300 employment opportunities and 95% of the employees are Colombians, and the future employment opportunities will reach 3,700. As of press time, the cumulative annual output of the project is about 1.11 tonnes. It is expected to produce 2.18 tonnes of gold this year and 5.196 tonnes of silver.

During the ceremony, the archbishop of Buriticá Municipality held a blessing ceremony on the spot. More than 50 people including project employees, collaborators, and invited community leaders witnessed the ceremony. Colombian National Television broadcasted the entire ceremony.