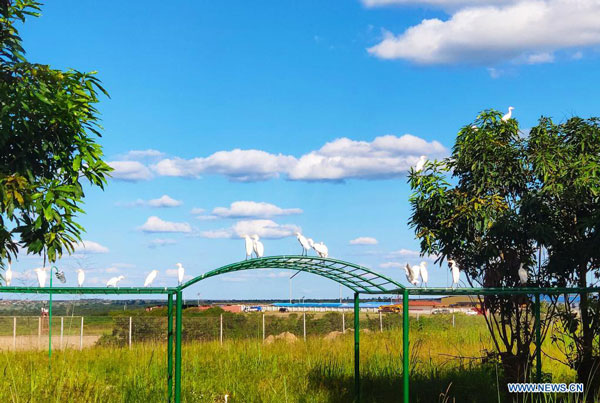 Egrets are seen at the mining site of the Chinese mining company Zijin Mining in Kolwezi, southern Democratic Republic of the Congo (DRC), April 4, 2020. (Xinhua)

KINSHASA, July 18 (Xinhua) -- In Kolwezi, in southern Democratic Republic of the Congo (DRC), beyond counting are drilling rigs and dump trucks coming back and forth on mine after mine.

But on the outskirt of this world-class mining hub, one particular mine stands out from the others, with greenery sprawling its mining dumps where a lot of dust are always supposed to be in the air.

After years of green mining practice, Chinese mining company Zijin Mining, the owner of this green mine, has won praise from the local community by constantly reducing the footprint on the environment caused by mining activities.

Zijin Mining owns and operates here the 4th largest copper company in the DRC, a country that harbors vast reserves of copper, gold and many other valuable minerals.

As the mining deposits keep cashing in, the Chinese company has always put sustainability a priority with its green mining practice that brings real benefits to the local community.

In 2018, the company started afforestation and revegetation work on its waste dump. However, the efforts went in vain at the initial stage, as less than 10 percent of the first batch of green plants survived due to the poor soil condition.

"Because of the soft soil and the rainy season during construction, transport trucks often sank in the mud. We had to rely on shovels or manual force, leading to slow and painstaking progress at work," Lin Weifa who was in charge of the greening operation recalled.

After repeated tries, the company finally managed to armor the waste dump and slopes of the tailings dam with nearly 400,000 square meters of vegetation cover, winning praises from local residents close to the mine.

"The gree works in recent years have effectively improved air quality and successfully protected surrounding residents from many infectious diseases. This is what I have never seen in other companies around Kolwezi," local resident Biladi Cooper said.

The vegetation cover also turns the mine into a paradise for migratory birds. During the rainy season in 2019, about 50 African little egrets arrived out of blue to the mining area. Every rainy season ever since, it becomes a hot ticket for wilds birds of various kinds.

However, going green in mines is also about realizing ecological transition that makes mining activates as much sustainable as possible. In late 2018, the company launched a program to treat waste gas from its smelter, making the gas much less polluting. It also built solar lighting systems and used more clean energy in recent years.

According to Albert Yuma, President of the DRC's state-owned mining company Gecamines, the partnership with the Chinese company is "a model for Sino-Congolese joint ventures" for its efficiency demonstrated throughout the construction and operation process.

"Zijin Mining is a company that embodies a high sense of duty and responsibility, and it has indeed carried out mining for the benefit of the Congolese people through its practices," said Dany Banza, ambassador-at-large of the President of the DRC.