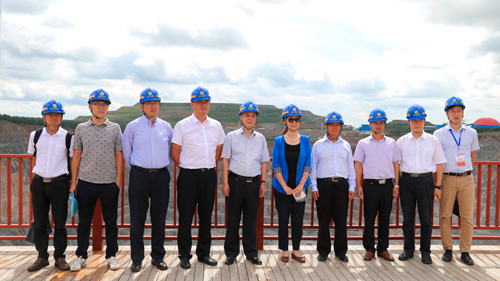 Delegates led by Vice Director Wei YU of the Raw Materials Department of the Ministry of Industry and Information Technology of China, and Vice President Fushan SHANG of China Nonferrous Metals Industry Association, paid a visit to Duobaoshan Copper Mine on August 9th and 10th, on the sideline of the 16th China Nonferrous Metals Forum which was held in Heihe City of Heilongjiang Province in Northeastern China.

Wholly owned by Zijin, Duobaoshan Copper Mine was established in 2006 and put into operation in 2013. Ever since then, it has produced an accumulated amount of 163,000 tons of copper with a total production value of 7 billion RMB, and it has already grown into the largest copper producer in Northeastern China.

This forum was hosted by China Nonferrous Metals Industry Association, co-hosted by Heihe City Government, and organized by Duobaoshan Copper Mine Co., Ltd. It was dedicated to promoting the China State Council’s New Development Concept, which is to upgrade the ecological environment construction in mining areas, push mining companies to accelerate the industrial transformation, and create a new industrial development model featured with green, circular and low-carbon development, and innovative, economical and recyclable ways of resources usage. More than 200 experts, scholars and representatives from metal producers, research institutes, investment firms and trading firms in the nonferrous metals industry in China attended the forum.

The group of delegates visited the worksites and listened to the introduction on business operation and green reconstruction by the Duobaoshan Copper Mine. They agreed that the company has done well in those areas and established a positive image for a copper mine.

Duobaoshan Copper Mine and the Zijin Group as a whole firmly believe in the concept of “Lucid waters and lush mountains are invaluable assets”, and have already developed a green-mine growth path featured in both economic and ecological benefits.