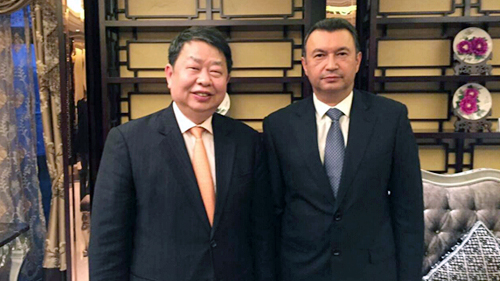 Mr. Chen Jinghe, Chairman of Zijin Mining Group met with Mr. KokhirRasulzoda, Prime Minister of the Republic of Tajikistan during the time when he attended the 14th Meeting of the Council of Heads of Government (Prime Ministers) of the Shanghai Cooperation Organization (SCO) in Zhengzhou on December 14th. Both sides exchanged frank and in-depth views on Zijin’s investment and development in Tajikistan.

Chairman Chen Jinghe said that as ZGC is the largest gold mining company in Tajikistan and one of the most important gold mining companies in Central Asia, Zijin Mining, with support from Tajik government, is confident of the prospect of this investment.

Mr. KokhirRasulzoda said that Tajik government appreciated the contributions ZGC had made to the development of local economy and improvement of people’s living standard in the past few years, and valued the importance of creating a favorable external environment for its operation. Currently, a joint working group is established to tackle with the related problems.

Tajik Minister of Industry and New Technology and Minister of Economic Development and Trade also attended the meeting.