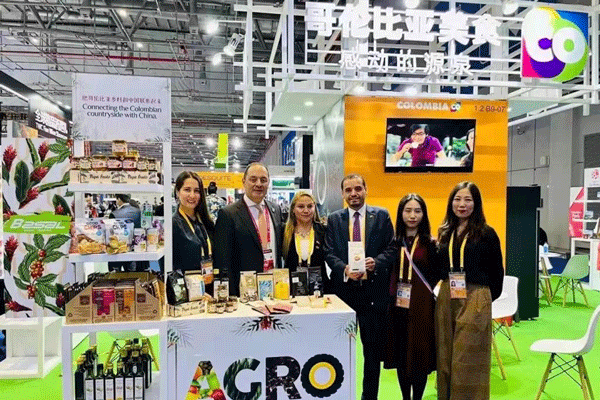 The fourth version of the China International Import Expo (CIIE) is being held at the National Exhibition and Convention Center in Shanghai, China, until Wednesday November 10. For the second consecutive year specialty coffee grown in Western Antioquia is present, thanks to the commitment of Zijin-Continental Gold with the coffee growing sector of the region.

Luis Diego Monsalve Hoyos, Ambassador of Colombia in the People's Republic of China, highlights the presence of this coffee with the purpose of opening doors in that market. “This is currently the most important market in the world. China has 1,400 million inhabitants and of those about 500 million are upper-middle class, with high consumption capacity, who are looking for different, new products with added value ”.

The promotion of coffee produced in the West of Antioquia by the Company began in 2020, when it facilitated the presence at this fair, for the first time, of six of the brands that are part of the Association of Specialty Coffee of the Ribera del Cauca.

For the second consecutive year, Zijin-Continental Gold managed the presence of specialty coffees in this important space, through the company Basal Trading, and with the support of Procolombia, the Colombo China Chamber of Investment and Commerce, the Chamber of Commerce of Medellín for Antioquia and the Ibagué Chamber of Commerce.

The Colombian Ambassador to China assures that coffee consumption is growing in this country, which represents an opportunity for the special coffee that is produced in the West of Antioquia. “In China, coffee consumption is growing at double digits, every year it grows 20, 25 and 30%, and what they want most is specialty coffee, coffees with a history. And the history of the coffees that are arriving, the ones that Zijin-Continental Gold is supporting is very important, because they are small producers who are having that special support from the mining company, which is doing its responsible mining work, but is also looking at their social environment and the people who live in their nearby areas are supporting them to develop their agricultural production, a production that will allow them to have a good quality of life ”.

The China International Import Expo -CIIE- Fair is a window for different organizations in the world that want to show their products and open up to a new market, hence the importance of the presence of

"What you see at the fair is that people come closer, know them, are interested, and I am sure that little by little they will be able to enter this market, I generally argue that for Colombia, Colombian coffee in China in less than a decade would have to be almost the first or second market for Colombian coffee, and hopefully it would be done through this type of products, special coffees, small producers that manage to develop, that manage to generate a friendly social environment in their regions, an environment where they can achieve those economic social objectives they are looking for ”, says Ambassador Luis Diego Monsalve Hoyos

Zijin-Continental Gold is committed to the strengthening of the coffee sector in the West of Antioquia through projects such as the Association of Specialty Coffee of the Ribera del Cauca, which represent a growth of the local economy and well-being for their families.

“I wanted to detail that the support that Zijin-Continental Gold is giving to the Association of Specialty Coffees of the Ribera del Cauca seems fundamental to me, so that through the specialized company Basal Trading they get to exhibit in this market, where it has the largest opportunities for Colombian coffee ”, stated Luis Diego Monsalve Hoyos, Colombian Ambassador to the People's Republic of China.

The mining company also supports coffee growing in the region through programs such as the Alliance for Coffee Development in Western Antioquia, the Siembra Futuro Agricultural Development Program, the Productive Chain Program (PEP), the Legal and Sustainable Productive Opportunities Program ( OPLS), and the Comunica Project.

Thanks to this, training and business strengthening has been provided to many coffee growers, and significant progress has been made with the renewal of coffee bushes, accompanied by an incentive for fertilization; delivery of canopies, ecological stoves and the planting of wood orchards.